The Merc 154 is finished 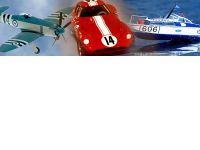 The Merc 154 is finished, more or less. I have spent a good part of this week modifying it, especially the front end. THe grill is already in the mould so the one in the pic is just a blank, usually have about three or four blanks in case I mess it up. Have now got to modify the exhausts and thats it, only 5 months late. So hopefully it will be in production next week. And yes I know I said that last week. So if you want one for Christmas order now and we might just be able to get it out to you. It is the case as I have said 95 percent of the model takes 5 percent of the time and the last 5 percent takes 95 percent of the time. But that last bit of the model is the most important, but even then we dont get everything right, only human after all. Another photo will turn up or someone will send me more information, some useful and some we already had but please keep sending stuff. The slightly widened Lotus Cortina is moulded and finished but I wont be doing proper decals for it at the moment but I will do some low run decals done on white decal sheets. They need to be cut accurately and when on the model they have to be sealed on with a varnish. I will be taking a couple to Orpington on Sunday. I have got some Richard Mack chassis in stock and will put them on the accessories page in the next few days

Back to recent news